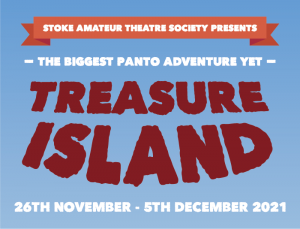 Ahoy there me hearties!

Come on you scurvy sea dogs and escape your landlubbers lodgings and join us as we travel, across the Seven Seas (with an excursion under the sea to Davey Jones Locker!) heading for the mysterious Hi Tiddley Hi Ti Island otherwise known as Treasure Island

This new laughter packed Panto is the perfect family show that takes the dusty old novel written in 1881 and turns it into an hilarious, high energy extravaganza of  silliness and sensational swashbuckling.

The only things from the original  literary classic will be a boat, a parrot, an Island, a treasure chest and of course the infamous one legged Pirate the Long John Silver

So please don't think this is going to be highbrow and boring, Robert Louis Stevenson's original  adventure  didn't have custard pies and buckets of gunge in what promises to be the messiest slapstick version of The 12 Days of Christmas ever seen in Pantoland!!!

So splice the mainbrace and pull up the anchor, grab your eye patch and a parrot (which you can buy from the pirates favourite shop – Arrrrrgos!) raise the Jolly Roger, shiver yer timbers and make sure you book your tickets now...... or you'll be walking the plank!!